Home » Press centre » Science, Technology and Innovation are Crucial for Facing the Pandemic and Moving Towards a Transformative Recovery with Equality and Sustainability in the Region
Available in: EnglishEspañol

Science, Technology and Innovation are Crucial for Facing the Pandemic and Moving Towards a Transformative Recovery with Equality and Sustainability in the Region

Alicia Bárcena, Executive Secretary of ECLAC, and Ministers Santiago Cafiero and Daniel Filmus, from Argentina, and Paola Vega Castillo, from Costa Rica, participated in the inauguration of the Third Meeting of the Conference on Science, Innovation and Information and Communications Technologies, held in person in Buenos Aires.
13 December 2021 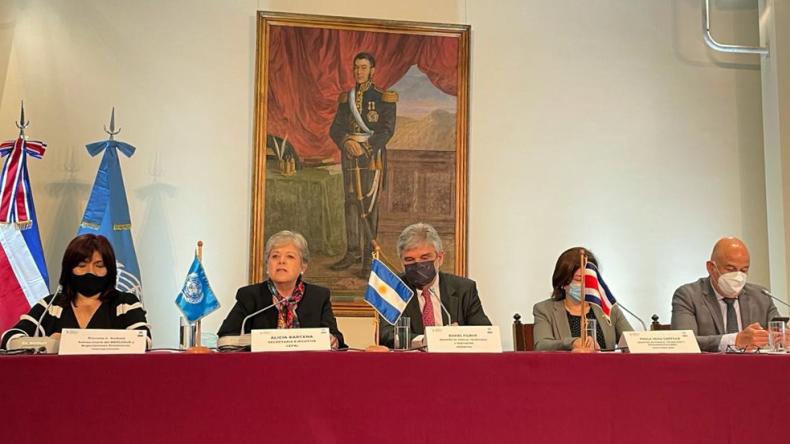 Science, technology and innovation (STI) are crucial not only for facing the COVID-19 pandemic, but also for moving towards a transformative recovery with equality and sustainability in the region, authorities and international officials indicated today during the inauguration of the Third Meeting of the Conference on Science, Innovation and Information and Communications Technologies, organized under a hybrid format by the Economic Commission for Latin America and the Caribbean (ECLAC) and the Government of Argentina.

“Science, technology and innovation have been essential for managing the health crisis – with vaccines developed with public resources in record time – but they are also indispensable for a transformative recovery with greater equality and environmental sustainability in Latin America and the Caribbean,” Alicia Bárcena stated during the opening ceremony. The pandemic, she indicated, has exposed grave asymmetries between the developed world and developing countries in access to vaccines, the concentration of wealth and income, the digital economy and climate responsibilities, which threaten to worsen.

In this context, Bárcena highlighted the recent approval by the Community of Latin American and Caribbean States (CELAC) of the Plan for Self-Sufficiency in Health Matters in Latin America and the Caribbean, prepared by ECLAC. “We have knowledge and capacities. We are ready to create a regional platform for clinical trials and regulators,” she underscored.

Daniel Filmus, Minister of Science, Technology and Innovation of Argentina, emphasized that the production model in Latin America and the Caribbean does not allow for growing and distributing. “There can be no process of sustained development if science and technology are not incorporated,” he said, urging for progress on economic and logistical integration. “Our countries are exporting labor because we cannot compete with the salaries (abroad),” he indicated, adding that “we must devise and create shared strategies, with ECLAC’s help. In Latin America we have the tools to do this, it depends on politics and how we can join forces.” With regard to vaccines, Filmus stated that “Argentina and Brazil are in a position to generate vaccine platforms and we need integration from Mexico to Tierra del Fuego, to have regional alliances.”

Meanwhile, the Minister of Costa Rica, Paola Vega Castillo, stressed that one of the biggest lessons from the pandemic has been to reposition the importance of digitalization, along with the need to accelerate it and to close national and regional gaps. “We have many challenges ahead in terms of connectivity and digital and scientific literacy, in order to build the society we want. Science, technology and innovation are a tool for achieving equal opportunities” in our countries, the Minister said, pointing up the Conference on Science, Innovation and Information and Communications Technologies of ECLAC as a space that fosters joint work in that direction.

“We know that the knowledge economy is the sector with the greatest potential: it generates value and employment, broadens export capacity and has a direct impact on the real economy and on the quality of life of our peoples,” Argentine Foreign Minister Santiago Cafiero said in a video greeting, citing the Plan for Self-Sufficiency in Health Matters as “an example of the creative and concrete direction that Argentina must take when it hosts the thirty-ninth session of ECLAC” in 2022. “Argentina considers ECLAC to be a strategic ally for promoting a renewed regional agenda, one that would improve the prospects of a region that faces challenges such as the need to improve social inclusion, expectations for economic growth, physical infrastructure and investment levels,” he stated.

In her remarks, Alicia Bárcena called on countries to harness the great opportunity for science, technology and innovation that has opened up with the pandemic. “Capacities are not generated by themselves, they are long-term processes that require investment and complex productive structures that demand science and technology. Our productive structure does not demand science and technology; we have to create that virtuous circle,” she emphasized.

“This is the time to move towards the structural change that has been so elusive in our region. We must shift the development paradigm to move from an extractivist model to a sustainable mode of production. From a culture of privilege to one of equality. We must promote effective instruments for redistributing knowledge and capital,” she recapped.

After the meeting’s inauguration, the Deputy Executive Secretary of ECLAC, Mario Cimoli, presented the main messages from the position document Innovation for development: The key to a transformative recovery in Latin America and the Caribbean, which indicates that the STI systems of Latin American and Caribbean countries are underfunded and concentrated in basic and applied research activities, with major gaps on matters of experimental development, and that post-pandemic recovery plans represent an opportunity to reorient STI strategies so they are at the service of sustainable development and to redesign international cooperation in this area.

The report also stresses the importance of the health-care manufacturing industry, of digital technologies for industry and of environmental efficiency for promoting a structural change based on knowledge creation in the region.

On the Conference’s various panels, which are taking place virtually, participants will debate about the relevance of institutions and public policies for promoting science, technology and innovation; the diaspora and the circulation of talent in Latin America and the Caribbean; the development of genome repositories in the region; the gender perspective in science, technology and innovation systems; the role of science and technology in health sovereignty; the role of digital technologies and the new business models and new productive capacities in SMEs in the digital age; the contribution of aerospace and satellite technologies to sustainable development; technological development and added value in the lithium chain; and eco-innovation, the energy transition and sustainable production, among other topics.

LIVE TRANSMISSION. Video of the first day of the conference. Website of the Third Meeting of the Conference on Science, Innovation and Information and Communications Technologies.