Home » Press centre » Countries Advocated for Science, Innovation and New Technologies to Play a More Active Role in Policies for the Region’s Economic, Productive and Social Development
Available in: EnglishEspañol

Today marked the conclusion of the Third Meeting of the Conference on Science, Innovation and Information and Communications Technologies, organized by ECLAC and the Argentine government.
15 December 2021 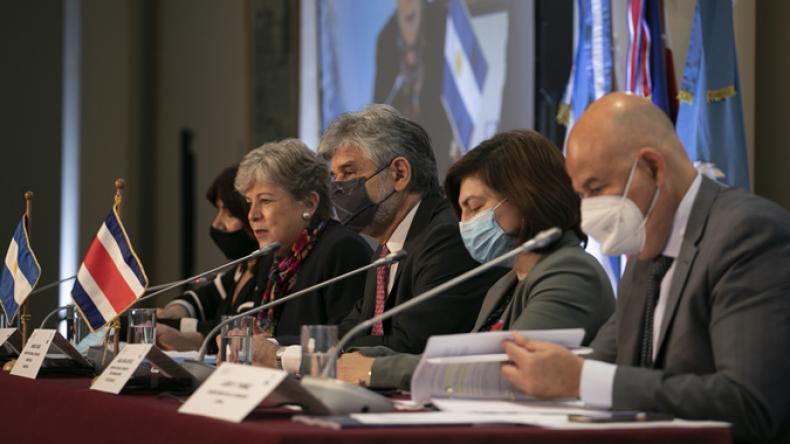 Photo of the conference's opening session held in Buenos Aires.

The region’s countries reaffirmed their commitment to science, innovation and new technologies, highlighting the role they have in the post-pandemic recovery, and they advocated for a more active and systemic role for innovation and knowledge in the policies aimed at fostering Latin America and the Caribbean’s economic, productive, social and environmental development, at the close of the Third Meeting of the Conference on Science, Innovation and Information and Communications Technologies, organized under a hybrid format by the Economic Commission for Latin America and the Caribbean (ECLAC) and the Government of Argentina.

Although progress has been made in several countries of the region to build a more robust institutional framework for science, technology and innovation – with the creation of specific ministries or the strengthening of specialized institutions in this area – science, technology and innovation still do not have an active role in economic, productive and social development policies, which is related to meager levels of technical change and low productivity, according to the Buenos Aires Declaration approved this Wednesday.

At the meeting – in which 21 of ECLAC’s Member States and 7 of its associate members participated – the biennial programme of cooperation activities for 2022–2023 on science, innovation and information and communications technologies was approved, with the main objectives of strengthening public institutions to support the development of science, technology and innovation; improving the links between science, technology and innovation policies and the region’s strategic challenges; and fostering regional and international cooperation to forge new, knowledge-based paths to development.

To achieve these objectives, participants agreed to carry out a series of activities, including political and technical meetings, substantive studies and technical assistance activities, with a focus on exchanging information, experiences and good practices.

At the event’s inauguration, on Monday, December 13, Alicia Bárcena, ECLAC’s Executive Secretary, emphasized that science, technology and innovation (STI) have been essential for managing the health crisis, but they are also indispensable for a transformative recovery with greater equality and environmental sustainability in Latin America and the Caribbean.

In this context, Bárcena stressed the importance of regional integration and cooperation for closing the growing asymmetries between the developed world and developing countries in access to vaccines, the concentration of wealth and income, the digital economy and climate responsibilities, which threaten to worsen. A concrete example of collaborative work on STI, she noted, is the recent approval by the Community of Latin American and Caribbean States (CELAC) of the Plan for Self-Sufficiency in Health Matters in Latin America and the Caribbean, prepared by ECLAC.

The meeting’s final day included a roundtable with the participation of Diego Hurtado, Secretary for Planning and Policies on Science, Technology and Innovation at the Ministry of Science, Technology and Innovation of Argentina; Paola Vega Castillo, Minister of Science, Innovation, Technology and Telecommunications of Costa Rica; Marc Litvine, of the Directorate-General for International Partnerships (INTPA) of the European Commission; Armstrong Alexis, Deputy Secretary-General of the Caribbean Community (CARICOM); and Efraín Guadarrama, Director-General for American Regional Organizations and Mechanisms at the Ministry of Foreign Affairs of Mexico, in his capacity as Chair pro tempore of CELAC.

On this panel, participants addressed some of the weaknesses that countries have regarding STI issues, and they emphasized the need to bolster national capacities, further the exchange of good practices, and generate and strengthen concrete spaces for regional and international collaboration and cooperation, such as the digital transformation, the energy transition, self-sufficiency in health matters – including vaccine production – and the bioeconomy, to name a few.

In the framework of the conference, ECLAC presented the position document Innovation for development: The key to a transformative recovery in Latin America and the Caribbean, which seeks to contribute to the debate and to action in the region to move towards health autonomy, digital inclusion and the development of solutions for more sustainable consumption and production.

According to the report, the region is making insufficient efforts in terms of investing in research and development (R&D), in contrast to the dynamic seen in more advanced countries and in other emerging regions and economies.

While the United States, the European Union, the countries of the Organisation for Economic Co-operation and Development (OECD) and China spend the equivalent of more than 2% of Gross Domestic Product (GDP) on R&D, in Latin America and the Caribbean, spending on R&D as a proportion of GDP is around four times smaller – and it has even declined in recent years, slipping from 0.65% of GDP in 2013 to 0.56% in 2019, the document warns.

According to this study by ECLAC, the health-care manufacturing industry, digital technologies and environmental efficiency represent an opportunity to promote a structural change based on knowledge creation in Latin America and the Caribbean.

On the Conference’s various panels, participants debated about the relevance of institutions and public policies for promoting science, technology and innovation; the diaspora and the circulation of talent in Latin America and the Caribbean; the development of genome repositories in the region; the gender perspective in science, technology and innovation systems; the role of science and technology in health sovereignty; the role of digital technologies and the new business models and new productive capacities in SMEs; the contribution of aerospace and satellite technologies to sustainable development; technological development and added value in the lithium chain; and eco-innovation, the energy transition and sustainable production, among other topics.

The Conference’s Executive Committee for the 2021-2023 period is composed of Argentina as Chair, and Costa Rica, Guatemala, Mexico, Peru and Saint Vincent and the Grenadines as Vice Chairs. The Fourth Meeting of the Conference will take place during the second half of 2023.